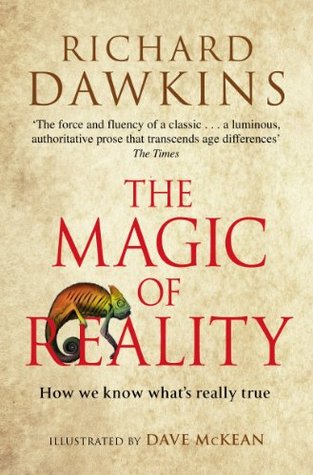 You must have raised your eyebrows when you find out that a man named Richard Dawkins writes about magic. Please, you don’t need to be confused. Dawkins doesn’t believe in magic. In fact, he doesn’t believe in God. What he meant by magic here in his book title was poetic magic.

… In this sense, ‘magical’ simply means deeply moving, exhilarating: something that gives us goose bumps, something that makes us feel more fully alive. What I hope to show you in this book is that reality–the facts of the real world as understood through the methods of science–is magical in this third sense, the poetic sense, the good to be alive sense. (p. 21)

According to Dawkins, all people around the world basically believe in myth, magic, supernatural thing, that kind of stuffs, to explain every thing that happen. The Inca tribe believed that the sun and the moon were their ancestors. The Aztec believed that they had to sacrifice human beings to please the sun god, otherwise he wouldn’t rise the next morning. The Sumerians believed that rainbow was created by Ishtar, a god, as a token of the gods’ promise that gods wouldn’t send another terrible floods. And some (nowadays) people believe that volcanoes eruptions, earthquakes, tsunamis, and diseases happen as a punishment for mankind from angry God.

Of course Dawkins doesn’t believe such thing. He is a man of science. He wrote:

… Science thrives on its inability–so far–to explain everything, and uses that as the spur to go on asking questions, creating possible models and testing them, so that we make our way, inch by inch, closer to the truth. If something were to happen that went against our current understanding of reality, scientists would see that as a challenge to our present model, requiring us to abandon or at least change it. It is through such adjustments and subsequent testing that we approach closer and closer to what is true. (p. 22)

There are twelve chapters in this book and all starts with a question. Questions are “Who was the first person?”, “Why do we have night and day, winter, and summer?”, “What is the sun?”, “What is the rainbow?”, etc. Dawkins first answered those questions with mystical anwers that are believed by some people. Next he would explain with scientific anwers. For those who are supernatural, myth, or whatever believers may quite difficult to accept those scientific answers. But for those who are open-minded, I bet there is no problem to accept the answers that have been provided by Dawkins.

This book is easy to read. It’s a light reading book, although it’s talking about general science. I can finish reading this book in mere one day. Imagine! A non-fiction book I can finish reading in only one day! HAH! *snob* This kind of book is a perfect book for people like me whose background are soooo far away from science. If you want to take the first step getting to know about science in general, then this one is good for you. This book also aims for teenagers. With witty and easy words to chew, it’s perfect for teenagers. But, I have to warn you that this book is a little bit bias. If you’re looking for a book that can give you scientific arguments from the first page until the last page, you won’t find it here.

Why did I say that? It’s because throughout this book, in here and there, you can find Dawkins teased religion, gods, and stuff. I think Dawkins was trying to teach us to be skeptic, to be critical, to question everything. It’s a good thing. So, we don’t end up as a person who just easily believes what other people have said. But, well you know, it’s Richard Dawkins. He’s kind of atheist Pope. His views are clearly seen in The Magic of Reality. But, look at the bright side. He’s trying to make us fall in love with and believe in science. 😀 That’s what I’ve concluded from what he wrote in the last page:

… I hope that, in every chapter, you enjoyed the science that came after the myths. I hope you agree that the truth has a magic of its own. The truth is more magical–in the best and most exciting sense of the word–than any myth or made-up mystery or miracle. Science has its own magic: the magic of reality. (p. 257)

Even though I don’t learn anything new from this book, I still love it. Well, maybe that’s because I like Richard Dawkins. Okay, that sounds bias. But, who cares anyway? 😀 By the way, I just feel it’s a good thing reading Richard Dawkins’ book outside evolution and atheism theme. Well, evolution is still discussed in this book, but it’s only a glimpse.